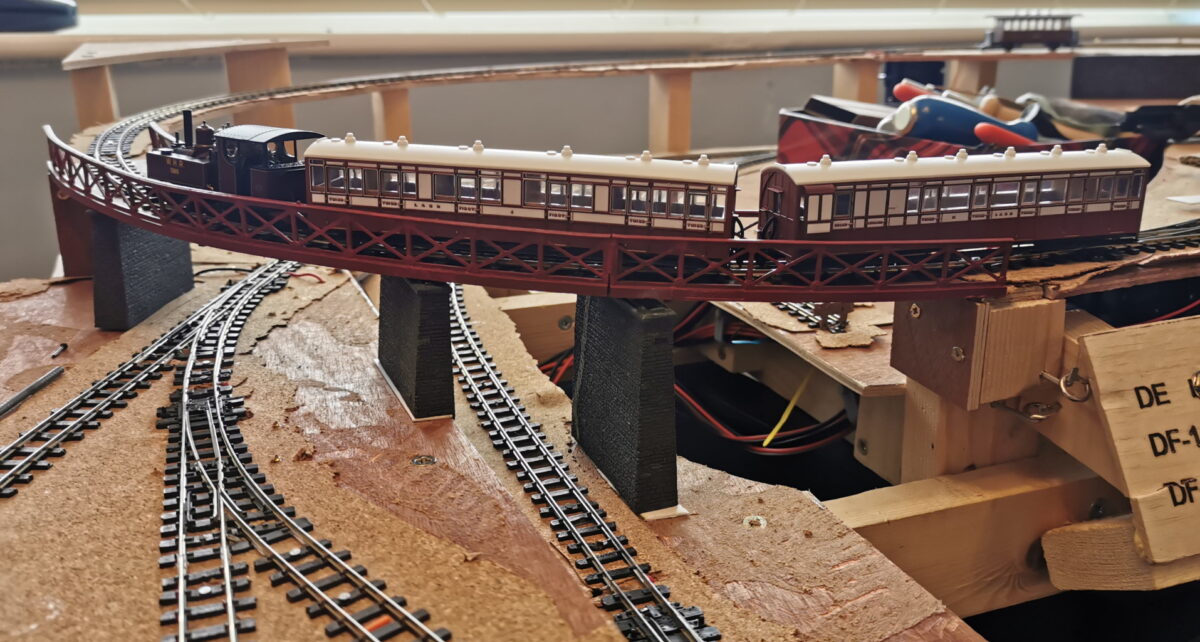 Lately work on the various railways has been rather slow…
We’ve been busy with various non-railway jobs (including replacing a fence in the garden), but also with the lockdown restrictions easing, we’ve been able to go out visiting places and seeing people again.

This has included two railway trips, to Didcot Railway Centre over the May Bank Holiday, and a lovely ‘afternoon tea’ trip on the Chinnor & Princes Risborough Railway.

One project that has been rumbling on is the new viaduct for the Bryn Ffenics Railway.
This carries the line between Bryn Ffenics and Llansilff over the entrance to Porthcadw. It’s quite an awkward location, on a sharp curve, with a steep gradient, tracks passing below and the ground underneath at different heights.
Unsurprisingly, we couldn’t find any suitable ready-made or kit structures that would be suitable, so it was always going to have to be scratchbuilt to fit.

Originally the plan was to build the bridge using the existing plywood trackbed as a base, however it was quickly determined that this wasn’t going to be wide enough to be suitable.

Therefore the wooden track bed has been cut out and replaced with a home-made viaduct. The bridge deck is constructed of thick plasticard, laser cut into the correct curved shapes, and reinforced with strips of plastic (old kit sprues!).

The sides are made from Hornby R660 elevated track sides. These proved a nightmare to stick to the plasticard, neither liquid poly nor superglue wouldn’t touch them. The only thing that worked was hot-melt glue from a glue gun!
The pillars are Ratio 254 N Scale viaduct pillars, cut to size and painted.

Relaying the track was a challenge, as the curve means there is very limited clearance, especially for the long L&B bogie coaches with wide step-boards.

However, the whole thing is now installed and, touch wood, trains seem to be running over it fine!

Work has also continued on the platform for Porthcadw. A canopy has now been added (Ratio 505 kit) plus gas lamps (Modelscene 5004) and benches (Peco LK-25).

The station nameboards are made of plasticard that Andrea has laser-cut into the correct size, with cocktail sticks for posts.
The signs themselves came from Trackside Signs who supply custom self-adhesive station signs in a wide variety of colour options. Their service was very prompt and helpful, and we we able to get enough signs to do all three stations on a single sheet, highly recommended.

The platform still isn’t fixed down as I still want to be able to move it out of the way whilst working in the area, to avoid the risk of damage. Suitable passenger figures have been purchased, but won’t be added until the platform is fully fixed in its final position.