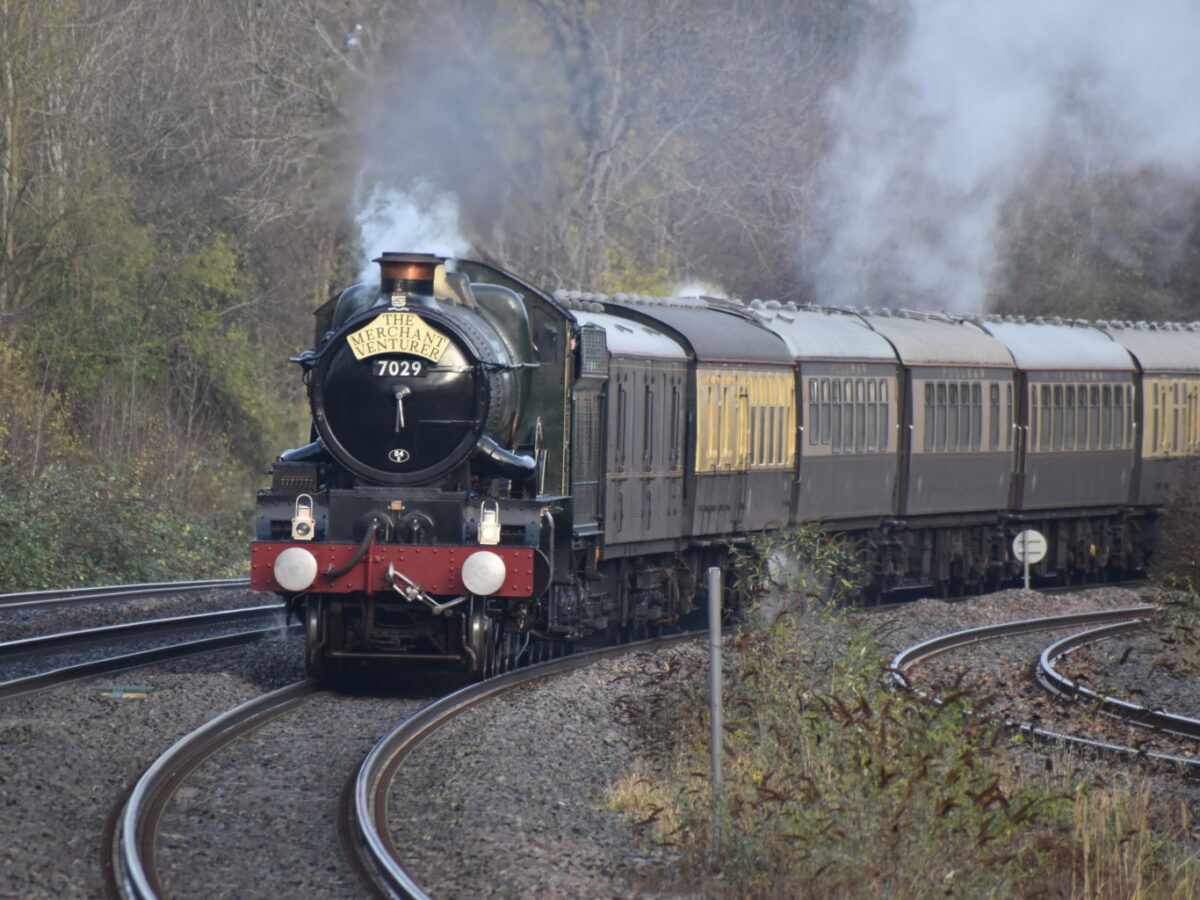 Happy New Year from me, Andrea and Luna at Phoenix Hill Railways.
All the best to you and yours for a happy and prosperous 2022!

Due to the rise of the Omicron variant, December has been fairly quiet on the railway outings front, but that has given me a little bit more time to work on the model railways instead.

In shocking news, I haven’t actually travelled by train since 9th of December. With the rise of Omicron, I’m back to working from home full time, so no trips to London.
Although a couple of Vintage Trains’ December railtours were very tempting, the idea of catching Covid just before Christmas was not, so I sadly had to give them a miss.

This, however, did not stop me heading down to Banbury station on the morning of Saturday 11th, to photograph two steam trains through Banbury within the space of 30 minutes.

First up was a now familiar sight, 7029 ‘Clun Castle’ stopping to pick up passengers on one of the aforementioned Vintage Trains tours from Tyseley to Bath and Bristol.
Just a few minutes after Clun departed, Black 5 no 44871 came through non-stop in the other direction, with a Railway Touring Company trip from London to Birmingham and Shrewsbury.
The trains apparently passed just outside Kings Sutton, to the delight of the photographers who had set up there.

This month saw the arrival of three long-awaited steam loco models from Bachmann (produced exclusively for Rails of Sheffield).

First to arrive were two variations of the Caledonian Railway McIntosh 812 Class 0-6-0, 17566 in LMS Black and No 828 in ‘as preserved’ condition in Caledonian Blue.
I had originally pre-ordered only the LMS version (as it better fits the rest of my collection), but after seeing the absolutely gorgeous livery on the samples of 828, decided to have one of those as well.
The full-size 828 is due to make a rare foray south from Scotland next year, visiting the Spa Valley Railway, so I’m hoping I might get a chance to see it in the flesh!

All three models are absolutely gorgeous, and well worth the wait. However, with the recent unexpected arrival of the Fairlies, it’s fair to say my wallet has been feeling the pinch!

I have also taken delivery of two new DMUs:

The first is Dapol Class 121 ‘Bubble Car’ no 121034. This single-car unit was one of those used by Chiltern Railways on the peak time shuttles between Princes Risborough and Aylesbury until 2017. These were the last ‘first generation’ units still running on the national network.
I rode this unit in April 2017, just a few weeks before its withdrawal from service on 19th May, so I felt it would be appropriate to get hold of a model.
This was purchased from DCC Supplies as a ‘Graded’ model for a very reasonable price!

The other new DMU is a Bachmann Class 166 ‘Thames Turbo’ in First Great Western Link (ex Thames Trains) livery.
I regularly travelled on these units from North Camp station (when I lived just down the road) as well as between Reading and Oxford on my way to and from university.

The unit was offered at a good price as ‘DCC Fitted, non-running’. I couldn’t get any life out of the fitted chip, so stripped it out and replaced with a known-good Zimo chip and it all burst into life.
The unit was not DCC-ready as built, and the previous owner had not made any attempt to modify the lighting for DCC operation. Rather than trying to fit through-wiring and conductive couplings, I decided to fit a decoder in each end coach and wired it to the existing LED lighting circuit, which has done the job nicely.
I have another Class 166 in the purple ‘Dynamic Lines’ livery, on which I’ll make the same modifications at some point, as well as my Chiltern 168s which are a similar design.

A station building for Bryn Ffenics

With a few quieter evenings and weekends, I’ve also had a chance to continue with scenic work for the Bryn Ffenics Railway.

I wasn’t terribly happy with the Hornby station building that I’d bought for use at Bryn Ffenics. It was a bit too large for the narrow gauge setting, and also had some damage to the roof. Instead, I have opted to replace it with the Wills SS67 ‘Wayside Station’ building.

As alluded to in a previous update, the kit had been supplied with the incorrect roof. However, after e-mailing PECO (who own the Wills brand), I got a reply back within 24 hours with an apology and promise to provide the replacement part, and a package containing the correct roof arrived within a couple of weeks.

The kit has been painted in maroon and cream to match the other buildings on the layout, and fitted with station name signs from Trackside Signs.
Construction was a bit fiddly, and the painting is by no means 100% perfect, but I think it’s not bad going given my poor eyesight and lack of depth perception!

The next step will be to finish off building a platform for Bryn Ffenics station.

Here’s hoping 2022 brings a bit more normality to life, and come the spring, we’ll have more railway outings to report on.
My Rail Golden Ticket is valid until August, and I fully intend to carry on getting my money’s worth!