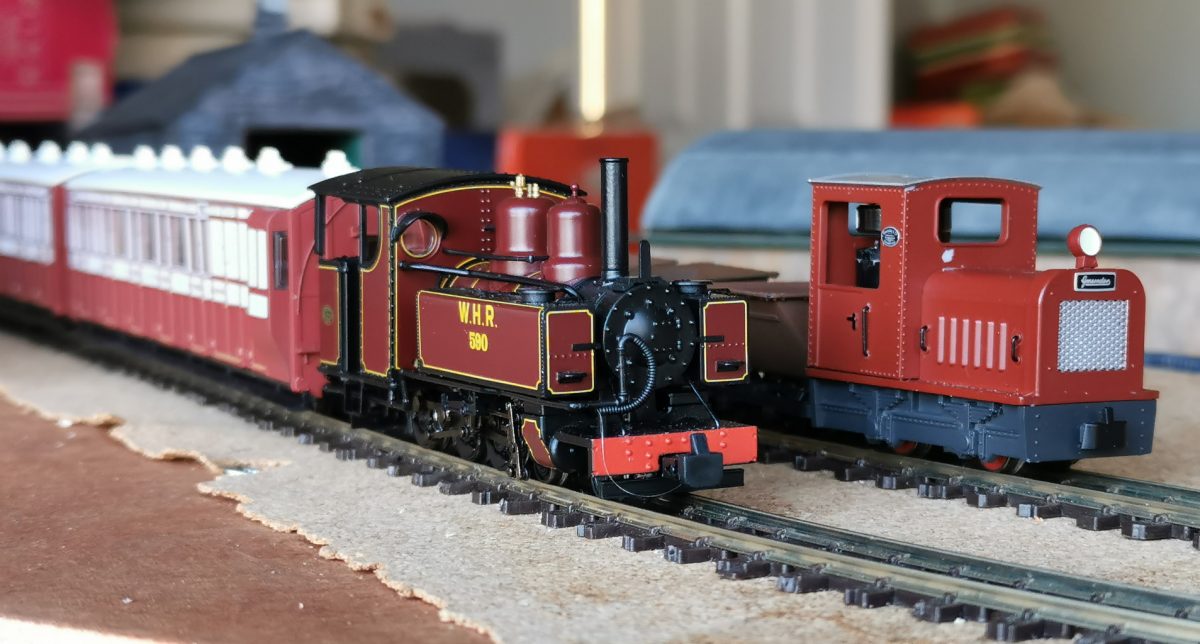 009 gauge (sometimes written as OO9 or OO-9) is used to represent British narrow gauge prototypes in 4mm:ft (1:76) scale, with a gauge of 9mm, rather than normal 16.5mm for OO ‘standard gauge’.
HOe gauge is similar, also using a gauge of 9mm, but at 3.5mm:foot (1:87) scale, and is more common for non-British prototypes.

Daniel has always had an affection for narrow gauge railways. As a child, he went on family holidays to North Wales every year, and spent many happy days visiting the Ffestiniog & Welsh Higland, Talyllyn, Llanberis Lake and Welshpool & Llanfair railways. He was also a regular visitor to the Hollycombe Steam Collection with their 2ft ‘Quarry Railway’.

Although he had an interest in modelling these railways, this was not an easy prospect, with very few British prototypes available in a ready-to-run form. The idea of building everything from fiddly kits did not really appeal.

In the last few years, however, this has changed dramatically, with Heljan, Peco and Bachmann all producing ready-to-run British locos and stock, along with buildings suitable for a narrow gauge railway.

Attention then turned to building a layout to run them on…

At the time, our spare bedroom that was planned to house the OO Gauge layout was awaiting a major refurbishment, including replacement flooring, the removal of a rather dated ensuite bathroom, and repainting.
Therefore, Daniel decided that by clearing a couple of shelves in his office and adding a couple of brackets to the wall, he could accommodate a small 009 layout, which he could work on in the meantime. This became the Bryn Ffenics Railway (BFR).

Ultimately, due to an opportunity to piggy-back it on another project, and some unexpected free time due to a certain global pandemic, the spare bedroom was refurbished a lot more quickly than we expected, so the BFR was moved into it to benefit from a less cramped working environment. It will be eventually be returned to Dan’s office when work that requires 360 degree access to the layout is completed.

The Bryn Ffenics Railway (or Rheilffordd Bryn Ffenics) is a fictional railway based in the ‘Top Left Hand Corner of Wales’ and draws inspiration from many of the real narrow gauge railways in this area.

The railway was built in the late part of the 19th century to carry slate, stone and produce between the town of Bryn Ffenics in the mountains via the village of Llansilff to the harbour at Porthcadw, for onward transportation by boat.
It also provided a valuable passenger service between to local residents along the line.

Although the railway was largely abandoned in the 1940s, it was purchased and resurrected by a determined team of preservationists, and now operates heritage passenger trains for tourists and locals.

Rolling stock generally consists of British 2ft gauge prototypes, but the rule is not ‘hard and fast’ and like many preservation projects, some stock was imported from the continent, being regauged where necessary.

To fit into the confined space available, the railway is built as a spiral, with 300mm radius curves and steep gradients (up to 1 in 25) linking each section.
Short trains are therefore the order of the day, but this doesn’t look out of place on a narrow gauge line.

Trains start at the terminus station of ‘Bryn Ffenics’ and proceed to the intermediate station of Llansilff, which has a passing loop, carriage shed and small halt.
Trains then pass through a long tunnel to Pont y Lleuad Jn where they diverge to either go to the passenger station at Porthcadw, or the low-level harbour sidings.

Due to its multi-level design, the BFR is built using an ‘open frame’ baseboard, with a skeleton made largely of 2×1 timber, and track beds made out of 6mm ply, supported on timber pillars.

Points are operated by DCC Concepts Cobalit iP Digital motors. These slow-action motors can be operated by a DCC handset or by pushbuttons on a panel (and both are available on the BFR).
They also have an inbuilt switch to change frog polarity on the electofrog points… an essential with the short wheelbase of many narrow gauge locos.

Each track section is fed by a DPDT toggle switch, allowing it to be connected to either of the controllers or to be isolated completely.
Care must of course be taken to ensure a section containing an analogue-only model is not accidentally connected to the DCC input.

Control equipment is exclusively from Gaugemaster, with a 16V AC transformer providing the power feed for the analogue walk-around units, and a Prodigy Advance 2 unit for DCC and point motor control.

The control panel was designed using QCAD and then burned onto a sheet of balsa using Andrea’s Eleksmaker laser-burner.
Due to the size, it had to be burned in multiple selections, and getting the alignment perfect proved hard work, but the result is definitely worth it.

The switch holes were drilled out and the switches installed and soldered together by Andrea.

The panel is connected to the under-board wiring using plug-in terminal blocks, allowing it to be removed and worked on separately.

The BFR has a mix of locos from Heljan (Manning Wardle 2-6-2T) Bachmann (WHR and GVT Baldwin locos), Liliput ‘U Class’ and a Minitrains ‘Gmeinder’ 4-wheel diesels and Decauville Progress steam loco.

The Heljan and Bachman locos are all DCC fitted (the latter with sound) and plans are afoot to fit decoders to the other two.

Goods stock comes from a mixture of manufacturers. This includes slate wagons, skip wagons, L&B open wagons and vans from Peco, and various miscellaneous wagons from Minitrains and Egger-Bahn.

Like many others, we’re looking forward to the release of more narrow gauge stock from Bachmann and Peco, particularly the ‘Quarry Hunslet’ tank engines!

There is still lots to do on the BFR, at the moment it is mostly just track on bare boards, and plenty of scenic work is required.

Before too much scenery can be added, the electrics and trackwork must be thoroughly tested for reliability and any gremlins dealt with.
It’s a lot easier to replace a dodgy power feed when it’s not buried under glued ballast!

There are also lots of buildings to construct/modify/weather and backscenes to add.

Finally, before re-installing the railway in Dan’s office, the shelving units must have the holes cut in them for the trains to pass through!

Keep an eye on this websites for all the latest updates as construction progresses!