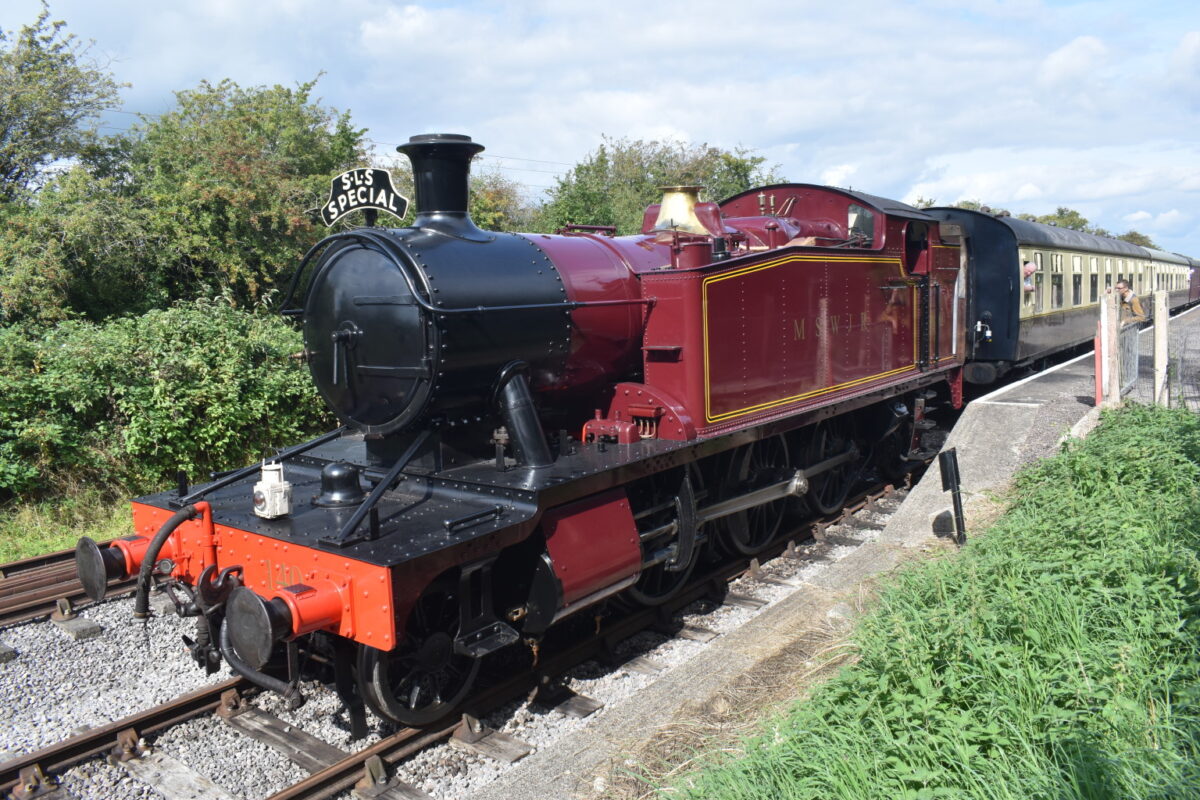 Well it’s been a busy few weeks since the last update, with a lot of full-size railway fun, plus some new arrivals on the model front.

The Phoenix Hill Railway has seen little action of late, as it’s been very difficult to get the trains out or to do any heavy work on whilst Covid prevented us from having visitors.

However Andrea’s sister and her family came up to visit over the weekend of 4/5 September, and it wouldn’t be fair for her 5yr old niece and 3yr old nephew to see the railway in the garden and not let them have a ride!

With help from Andrea’s brother-in-law, we got the diesel shunter, driving truck and passenger wagon out of storage and gave the kids (and the adults) rides up and down the line during the Saturday afternoon. This proved popular with everyone except Luna (who was no longer the centre of attention, getting balls constantly thrown for her!).

Despite not having been used in nearly a year, the track and formation were still in good condition, and though a bit of spot ballasting may be required in the near future, it was pleasing to see that no major engineering work is needed.

Return to the Big Smoke

On Thursday 7th September, I made the pilgrimage back to my London office for the first time since March 2020. It felt rather weird using the train for proper commuting again, though at least I have the Golden Ticket to cover the fare!

There are definitely still fewer passengers around on both the main line and Underground trains then pre-Covid, but demand is certainly starting to pick up again.
The train to London, which used to be 6 carriages, is now down to 3 coaches and has gained extra stops enroute. This meant that, despite lower numbers, some passengers were still having to stand for over an hour.
Hopefully the Train Operating Companies will be able to ramp up capacity to match the increased demand soon!

It was definitely nice to see my colleagues face-to-face again (and go for a couple of drinks after work), but I’m glad that I won’t be doing this more than 1 or 2 days a week anytime soon.

A Saturday in Swindon

On Saturday 11th September, we headed over to the Swindon & Cricklade Railway. Despite not being very far from us as the crow flies, it was a place I’d never actually managed to visit.
The S&CR was holding a gala over that weekend to celebrate the 60th anniversary of the closure of the original line and this was a good incentive to finally make the trip!

The Rail Golden Ticket was put to good use again to bring us to Swindon railway station. After a short walk to the nearby bus station, it was a 15min trip on the No 15 bus to the Tawny Owl stop.
From here, a path heads under the main road to Mouldon Hill Country Park and Taw Valley Halt, the S&CR’s southern terminus.

Trains were being worked by resident Andrew Barclay 0-6-0ST ‘Swordfish’ and visiting GWR Prairie No 5521.
In recent years this loco has carried London Transport red livery and been numbered L150, however, for this event, it was in a temporary ‘MSWJR’ livery as No 60 (the Midland & South Western Junction Railway being the company that built the original route of the S&CR).

At the northern end of the line, a diesel loco hauled shuttle trains from Hayes Knoll to the current railhead on the railway’s ongoing extension towards Cricklade.

At the railway’s HQ in Blunsdon, there was lots going on, with various stalls, museums, a miniature railway and other attractions.
One particularly interesting feature is that the cafe is made up of two former Norwegian Railways carriages. A few details and photos were taken on behalf of our Scandinavian correspondent…

After a few rides up and down, we headed into the Country Park itself to allow Luna to run off some steam, unsurprisingly, it didn’t take long before she’d jumped into the lake.

On the bus ride home, we discovered that GWR had cancelled our planned connection home (shortage of train crew apparently), and we were faced with the prospect of at least an hour’s wait for the next one.
Working on the principal of ‘get as far as you can’, we jumped on the next train to Didcot Parkway and hopped across the road to the Prince of Wales for a drink and dinner, while we waited for the next train to Banbury.

The S&CR is a delightful little railway, with lots of potential and big ambitions. We’re looking forward to returning, and hope it won’t be too long until we can travel all the way into Cricklade itself!

Heading up the Valley

The following Friday, 17th September, we headed out to another preserved railway, but on a rather different scale; the Severn Valley Railway between Kidderminster and Bridgnorth.

The railway was holding a 4-day ‘Autumn Steam Gala’ with a large number of engines in steam, including two visitors.
Under normal circumstances, we’d have gone on the Saturday, but Network Rail had decided to completely close Banbury station that weekend. Fortunately there was still plenty going on on the Friday, and it did mean the trains were a little less crowded.

The railway had originally advertised the gala as a ‘Book ahead, stay on one train only’ event, but a few weeks before had changed to a ‘Hop on, hop-off all day’ event.
This decision was controversial with some at the time, but I definitely appreciated the flexibility, it felt almost like life pre-Covid!

We were delivered to Kidderminster main line station courtesy of the Golden Ticket. The SVR’s very fine Kidderminster Town station is just across the car park.

After taking the train to the northern terminus at Bridgnorth, we headed off to sample the Cliff Railway. We do love a good funicular but had never got around to doing this one in the past, either because it wasn’t in operation or the timings just didn’t work out.

At the top of the cliff railway are the ruins of the castle, some very attractive gardens offering panoramic views over the town, and a van selling local ice cream (of which we took full advantage).

We spent the rest of the afternoon pottering up and down the line. We opted not to visit the Engine House at Highley this time (as we’d done that on both of our previous visits) and spent some time at Bewdley and Hampton Loade stations instead.
We did end up picking up a couple of signs from one of the sales vans, and no doubt these will make an appearance around the house or on the PHR soon!

The SVR never disappoints, and as one of the easiest railways for us to reach, I suspect we’ll be back again very soon.

A Castle in Banbury

And no… I’m not talking about the shopping centre!

On Saturday 25th September, GWR ‘Castle’ class 4-6-0 No 7029 ‘Clun Castle’ made a stop at Banbury on a Vintage Trains railtour from Swindon

I took the opportunity to take Luna for a walk to the station to watch the train come through. I think she’s getting a little fed up of having to stand around waiting while I take photos, rather than going on a train to somewhere exciting!

A couple of new models have arrived for the OO railway in recent weeks.

The first is the newly released Bachmann LMS 4P Compound 4-4-0 No 1189 in LMS Crimson Lake livery. This is a lovely model and will go very nicely alongside my Midland liveried model of No 1000.

The second is the Bachmann model of the ‘London Transport’ liveried class 20, 20142 ‘Sir John Betjeman’.
This is the DCC Sound fitted version, exclusive to the Bachmann Collectors Club, and wasn’t cheap, especially when factoring in the cost of joining the club to be able to order it!
However, it is a lovely model and will go very alongside my existing models of L150 and Metro-Vick Sarah Siddons.
Now all we need is the London Underground 4TC and maybe Metropolitan No 1!

We’ve got many more railway related activities scheduled for the next few weeks, hopefully involving the aforementioned Castle, so as always, stay tuned for more updates, and follow me on Twitter for live trip reports!