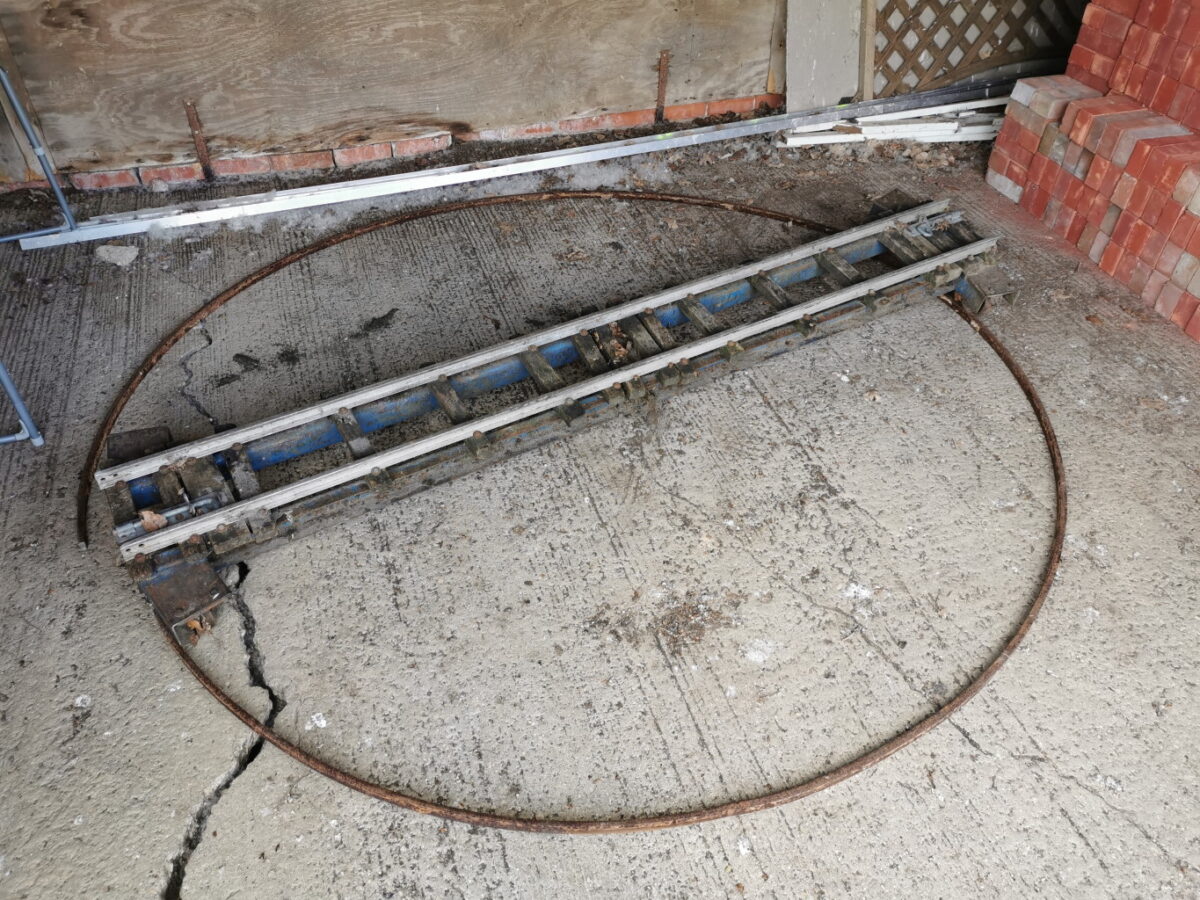 It’s been an eventful few weeks at Phoenix Hill Railways, with a number of new arrivals in both large and small scales, plus a bit of very exciting news…

Turntable for the PHR

The biggest item to arrive was an 8ft turntable, purchased for future use on the Phoenix Hill Railway (pictured above).

This had been listed on Facebook by Hollycombe Steam in the Country as it surplus to requirements (due to improvements on their own miniature railway). Although we aren’t ready to instal it just yet, plans are afoot, and it seemed like too good an opportunity to miss!
Hollycombe has always held a special place in my heart (having visited almost every week when I was a child), so I was more than happy to send some money their way!

As we don’t have access to a vehicle anywhere near big enough, one of their volunteers was kind enough to deliver it all the way from Liphook.

The deck will need a clean, repaint and some servicing before it can be used, plus the turntable ring had to be cut in half to fit in the van so will need re-connecting, but it’s still a lot cheaper/easier than buying or making a brand new one.

Hollycombe was badly affected by Covid restrictions, and has only just re-opened, albeit in a limited fashion, so I’d highly encourage everyone to pay them a visit, and hope to do so myself very soon.

We have also received a few new items destined for the Bryn Ffenics railway.

First up is the long-awaited Heljan Lynton & Barnstaple Baldwin 2-4-2T ‘Lyn’. This is the post-1932 Southern Railway liveried version, which is as close as possible to the replica now operating on the restored L&B, and also matches our existing ‘Lyd’.

Heljan seemed to have learned their lessons from the Manning Wardles, and Lyn ran smoothly out of the box, even over some of the more complicated trackwork. It also had no problem hauling the Peco L&B coaches up the steep gradients on the BFR.

It has yet to be fitted with DCC, I’m waiting to see how others get on with that before I try it myself!

As scenic work on the BFR continues, I’ve also acquired a few new buildings, that will primarily be used to form a ‘slate quarry/processing’ area next to the siding at Pont-y-Lluead junction.

These included a Bachmann ‘Narrow Gauge’ themed slate processing building, boiler house with chimney and workman’s cottage, along with a goods shed to go alongside the siding.

I also constructed a Wills SS31 ‘Village Forge‘ kit and have painted it up to match the other buildings.

Thoughts are now turning towards making up some custom buildings for the layout, more on this in due course…

A few ‘OO’ bits and pieces have also arrived in recent weeks. This has included a Dapol Class 68 in Chiltern livery, a Hornby Peckett B2 0-6-0ST and two Dapol/Model Y1 Sentinels along with a variety of LMS wagons.

Before Covid hit, I used to commute to and from London every day on Chiltern Railways trains hauled by Class 68 locos, so when one was advertised by Hattons at a bargain price, I couldn’t resist picking it up. It’s a hefty model and runs well. Now we just need someone to produce the Mk3 coaches and DVT to go with it!

The Peckett originally arrived with severe damage. The back of the cab had broken off and there was a massive crack down the bunker.
Fortunately, the loco was promptly replaced by Jadlam Models (who also paid the return postage), and the replacement arrived without issues.
However, from other reports, it sounds like quality control on these models is something Hornby need to get a grip on.

The first Sentinel was an eBay purchase, and came with damaged small parts (not unexpected, as they were clearly visible on the listing).
Unfortunately, the previous owner had converted it to ‘3-link’ couplings, but rather than remove the existing coupling pockets, had just cut them off in situ.

The reason for this soon became apparent when I tried to fit some replacement couplings:
To reach the coupling screws, you have to disassemble the entire chassis (including removing the brake gear that was glued in place and couldn’t be extracted without breaking it!).

Eventually I gave this up as a bad job, but fortuitously came across another identical model on eBay, so purchased this as well and will now make one good model out of the two broken ones!

I’ve long been a sucker for the Welsh ‘Quarry Hunslets’ and ordered a 45mm gauge live steam one from Garden Railway Specialists a while ago.

A couple of weeks ago, I got a call to advise that the stock was due imminently, and asking for the balance of payment.
I’ll still have a bit of a wait, as the loco will be sent off by GRS to a third party for fitting of radio control components.
Meanwhile, it sounds like I am going to have to buy/build a suitable wagon to fit the receiver and batteries as they won’t fit on the loco itself, not to mention lay some outdoor track where I can test it!

I received a bit of exciting news at the end of July… I had been drawn as the first winner of the National Rail ‘Golden Ticket’ competition.
The prize is a year’s unlimited free rail travel across Great Britain, very much the holy grail for a rail enthusiast like me.
I’ve now been issued with a shiny ‘All Lines Pass’ and will be doing my absolute best to get as much benefit out of it as I can.

I’ll certainly be putting it to good use in the next couple of weeks, keep an eye on my @LittleRedTrain Twitter account, where I’ll be posting updates on my travels with the hashtag #RailGoldenTicket

I’ll also be posting more detailed reports and photos up here, so watch this space!