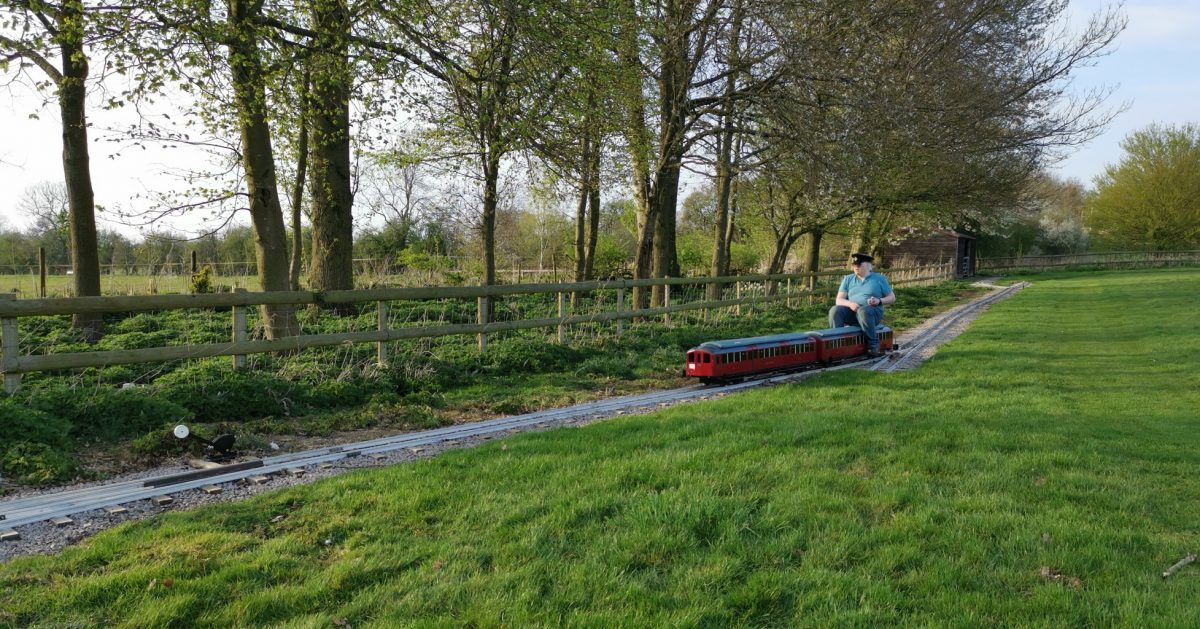 The railway is being constructed in stages as time and money permits.
Stage 1 consists of a simple out-and-back single line along one side of the site, with a two-track terminus nearer the entrance and a small station ‘Sirius Sidings’ at the far end (adjacent to an existing hard-standing and shelter).

For future proofing, the points have been installed to allow connection of future phases without the need for us to modify the existing track.

We completed construction of phase 1 at the end of 2019, though the global pandemic has delayed further progress.

The track bed is constructed by digging a 6″ trench in the topsoil and lining it a layer of geotextile membrane (to keep the weeds at bay while allowing water to drain through) and a layer of chicken wire (to discourage the rabbits from digging through it).

Ballast is 20mm granite chippings supplied by the local firm of C & W Knight and is delivered via tipper lorry, 10 tonnes a time. This worked out a lot cheaper than buying it bagged, though getting the tipper lorry up the drive to the ballast pile was a tight squeeze!

The track components were all provided by Narogauge Services at the Moors Valley Railway near Verwood.
Points were supplied as pre-assembled units, with track delivered as self-assembly kits of 35mm high aluminium rail in 5m lengths and treated wooden sleepers.

The railway is not open to the public, so there is no need to provide a regular frequent passenger service.

We run trains on a ‘when we feel like it’ basis, in between cups of tea, playing with the dog, and doing work on the railway and stock.

Currently the railway has no fixed signalling and is either operated on a ‘one engine in steam’ basis, or with a ‘whole-line’ token which grants exclusive authority to access the single line section between the two ends of the route.
All points are operated with weighted hand levers.

Longer term, proper signalling will be installed and key points will be motorised to allow remote operation.