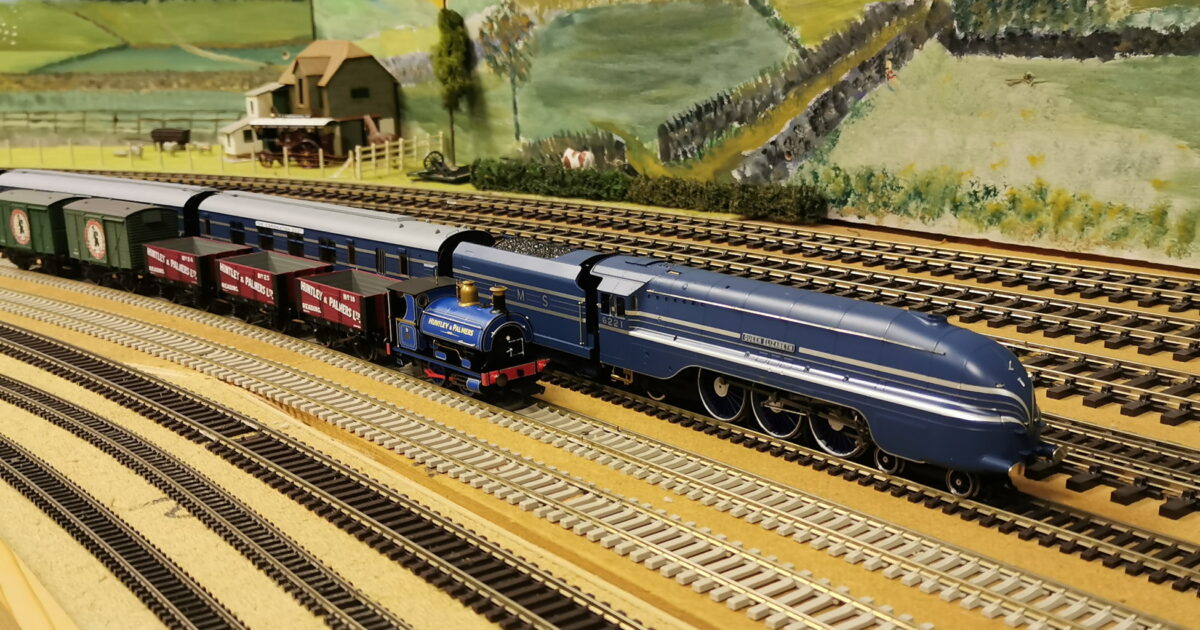 With many railways in their ‘hibernation’ season and Omicron still circulating, there hasn’t been much opportunity to get out and about with the Golden Ticket over the last couple of months, so focus has remained on the ‘indoor’ models.

Although a tentative plan was put together to travel on a steam railtour to Worcester on 19th February, that was ultimately vetoed by Storm Eunice. Thankfully our house and the PHR didn’t suffer any damage, but the full size railway through Banbury fared less well, with the roof ripped off a building and spread across the station throat!

Scenic work has continued on the Bryn Ffenics Railway.
During a break in the weather I was able to cut out a section of plywood to cover the tunnel behind Bryn Ffenics station. This is intended to be ‘lift out’ to allow track cleaning and recovery of failed trains if required (the back of the layout will not be accessible when it moves into its final location.

I was also able to cut out some hardboard sheet to make up the ‘back-board’ for the layout. This will allow me to build up the scenery from the raised trackbed areas to the rear of the layout, and add a suitable backscene.

I also did painted up some structures and small scenic items for use around the layout. This included:

The next step is finalise the layout of the Bryn Ffenics station and scenic area, and make up the platform.

With the recent arrival of my 45mm gauge GRS ‘Quarry Hunslet’, I had been on the look out for a way to mount the radio control receiver and battery, which are too big to fit on the loco itself.
Browsing eBay, I came across a second hand Mamod Garden Railway tender, which is re-gaugable between 32 and 45mm, and looked like it would do the job.
The Launceston Railway‘s Quarry Hunslet locos run with tenders, so it would also be prototypical, and less hassle than having to keep the loco permanently attached to a wagon.
The tender will be repainted to match and the drawgear modified to match the loco and other stock. Hopefully we can start at least some work on the G gauge railway during 2022, as live steam inside isn’t really practical!

Going down the Tubes

In mid-January, the long-awaited ‘EFE Rail’ motorised 1938 Tube Stock finally arrived.
As you can imagine, with my fondness for 1938 Tube Stock (in all scales), I already had a non-motorised EFE set in Bakerloo livery, which had been modified with Tenshodo ‘spud’ motors, and I was looking forward to seeing what EFE/Bachmann had done with the new versions.

Although the set itself runs well, and the additional of internal lighting is welcome, the actual bodies have been little improved from the original non-motorised versions.
It was also disappointing to see that they had not been modified to incorporate working head or tail lamps, which you’d expect on a train that spends most of its time in tunnels!
Although nice as a one-off, I thought the price was a bit steep considering the features now available on other multiple units at a similar price point.

Along with the 38TS, I also picked up a couple of ‘January Sale’ bargains, this included Hornby LMS Patriot class ‘Rhyl’ along with a few additional wagons and scenic items.

The first few months of 2022, saw announcements of new models from several manufacturers. A few items have caught my eye, with pre-orders duly submitted.

Photos will appear as soon as they arrived.

One of the delights of railway modelling is being able to get together with other like-minded individuals, run some trains, and just have a good natter over a cup of tea.
Unfortunately Covid stopped a lot of that over the last couple of years, but with the easing of restrictions, Andrea and I have finally joined the Banbury & District Model Railway Club.
The club meets twice weekly at their clubroom on the North side of Banbury, and has a large oval track for running OO, N/009 and O gauge models.
The club doesn’t currently have a website, but has a Facebook group with more info.

At the most recent session, Andrea brought along her Huntley & Palmers Peckett 0-4-0st and wagons, whilst I took my full 9-coach Hornby Coronation Scot rake (made up of loco 6221 ‘Queen Elizabeth’ and the set of latest tooling coaches).

While the Peckett was quite happily pottering along with its 5 wagons, the Coronation struggled a bit with the full train. It would go around the track in one direction, but slipped to a stand with the slight gradient and curves in the other.
This is a known issue, and the recommended fix is to check that all of the coach wheels are rolling freely, adjusting the lighting pickups and brake gear as necessary, so this will added to the to-do list, along with maybe some additional weight in the loco. Regardless, it was still a magnificent sight!

With the weather getting nicer and railways starting to open up, we should hopefully have some more ‘out and about’ trips to report on soon.