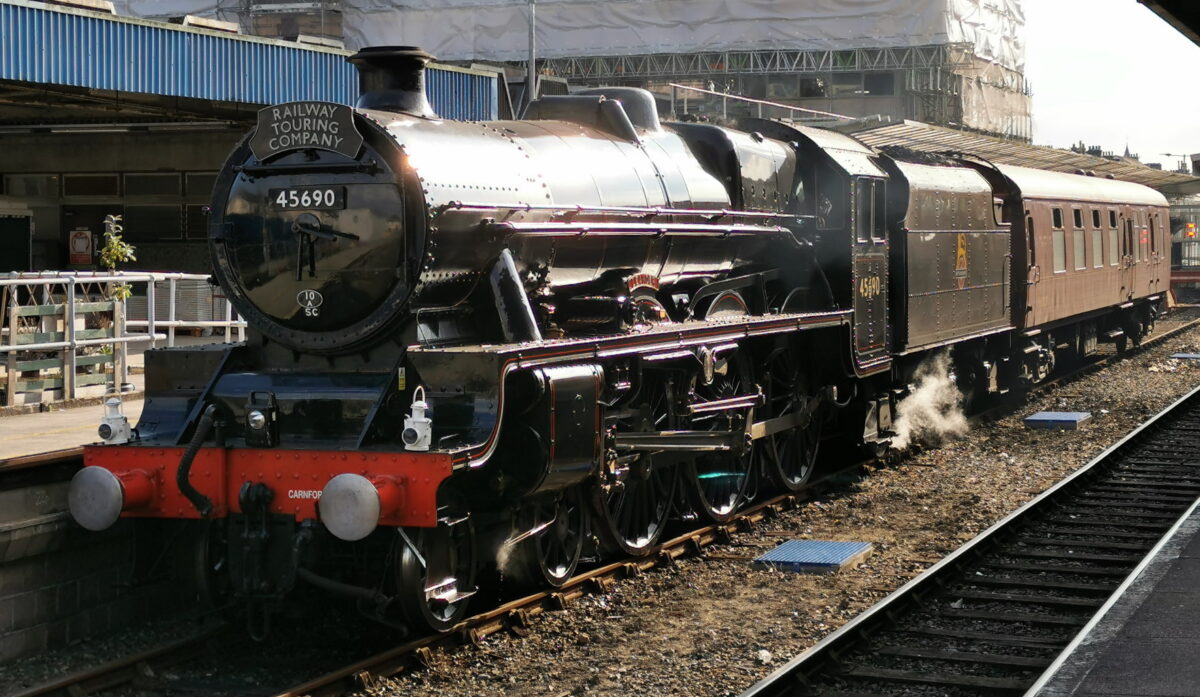 After our trip to Yorkshire last week, our rail adventures continued over the August Bank Holiday with a trip to the the South West. However, things did not go quite according to plan….

Also, an update on some new models for our OO collection.

Andrea and I travelled on one of the Railway Touring Company’s ‘Royal Duchy’ railtours on Sunday 29th August.
This series of tours normally runs from Bristol to Par in Cornwall, but due to the extensive engineering work currently taking place in the Bristol area, the 2021 tours had been revised to run from Slough to Par, via Reading and Westbury.
At Par, passengers would have the option of excursions by coach to Fowey or Charlestown.

This was our second attempt to travel on a Royal Duchy:
We had originally been booked on the 11th July trip along with Andrea’s parents, but our dog came down with Kennel Cough just a few days before, meaning she could no longer stay with the dog-sitter!
As it was too late to cancel our booking, we managed to sell our two tickets to friends of Andrea’s folks (who accompanied them in our place), and re-booked ourselves onto the 29th August run..

Due to the early start and late finish, it would’ve been impossible to do it in a day by service train, especially with a limited Sunday timetable, so we stayed the nights before and after at Andrea’s parents’ house in Reading.

The plan for the trip was that a diesel loco would take the train to Taunton, where it would be replaced by LMS ‘Jubilee’ class 4-6-0 No 45690 ‘Leander’, which would haul the train as far as Plymouth. The diesel would then re-join the train and take us on to Par and back.
Due to the St Blazey turntable being out of action, Leander would be turned and serviced at Plymouth, ready to haul the return leg back to Taunton, where the diesel would again take over again for the run back to Slough.
This was quite a coup, as Leander rarely appears this far south, normally being more at home in the northern fells!

We arrived at Reading in plenty of time, having managed to avoid the worst of the traffic associated with Reading Festival, and shortly after 9am, 47772 rolled in with the train.
We’d opted for the Premier Dining option (a treat to make up for our lack of holidays and restaurant visits during lockdown) and as soon as we sat down in our Pullman Parlour coach the stewards were pouring us glasses of Bucks Fizz and offering tea & coffee.

The journey down to Taunton was largely uneventful, apart from a slight delay at Newbury due to our platform being blocked by a GWR unit with a missing driver.
We were kept well fed with porridge followed by a generous and tasty ‘Full English’, very welcome on a slightly chilly morning.

By the time we reached Taunton, the gloom had cleared and the Sun was out! The loco change was scheduled to take place in the platform, so with plenty of time allocated, I wandered down to watch proceedings.
Leander and support coach were already waiting in the sidings, and the Class 47 was soon detached.
However, rather than heading off towards Plymouth as expected, it stopped just beyond the station, then reversed through an adjacent platform.
A quick check of Realtime Trains revealed that the light engine path to Plymouth had been cancelled, and I had a suspicion that the diesel might have been going on the back of the train instead, turns out I was wrong!

Leander soon backed onto the head of the train, resplendent in her BR Lined Black livery, and there was the usual scrum of photographers trying to get ‘the perfect shot,’ and getting frustrated any time that somebody blocked their view to get a closer look at the engine.

We left Taunton 10 minutes late, due to a delayed service ahead. Leander seemed in fine fettle and there was plenty of noise coming from the front.
After a short stop at Tiverton loop, we headed off towards Exeter and the famous ‘Dawlish Sea Wall’ section.

Then, over the PA, came the announcement every railtour passenger dreads. “This is an important announcement for all passengers, please pay attention!”
A very stressed-sounding train manager told us that there was a problem with the Class 47 that had brought us to Taunton, which meant that it could not proceed any further and had to return to WCRC’s depot in Southall for repair.
This meant that there would be no loco to take us forward from Plymouth to Par and that the train would have to terminate at Plymouth. (Leander being unable to take the train forward due to the lack of turning facilities).
GWR were unable to take passengers for Par on their services; due to driver shortages, they were suffering a large number of cancellations and couldn’t guarantee that they could get passengers back again in time.
As a Plan B, RTC had arranged for the coaches originally due to carry us from Par to Fowey/Charlestown to instead take passengers from Plymouth to Looe, so they could at least spend some time in Cornwall.

After some discussion, Andrea and I decided that we didn’t fancy spending an extra hour or two on a coach, and risking Bank Holiday traffic in Cornwall, so opted to stay in Plymouth instead.
We did, however, feel for the couple sat opposite, whose daughter lives near Par and had arranged to meet her there. (In the end, apparently she drove all the way to Plymouth to meet them instead!)

Meanwhile, Leander was putting in a sterling performance along the sea wall and up the infamous South Devon Banks, so with the drama over, we ordered a couple of drinks, sat back, and enjoyed the scenery and sound of a Jubilee working hard!

We arrived at Plymouth about 25min late (due to further late running service trains). Determined to make the best of our unexpected visit, we slathered ourselves up with sunscreen and took a very slow wander into the town centre and up to Plymouth Hoe, where Sir Francis Drake was apparently playing Bowls while waiting for the Spanish Armada to arrive.

There was an event due to take place later (sadly after our departure) where a puppet dragon was to take flight into the sea, and the crew were busy setting up. One of the props was a large floating ball, that, given the seaside setting, looked like something from The Prisoner.

As we were having dinner on the train, we avoided the lure of pasties and Fish & Chips, but we did at least manage to get a proper ice cream and a nice cup of tea before heading down to the Mayflower Steps memorial.

After a nose in a couple of shops, we ambled back to the station with plenty of time for a bit of trainspotting before the return journey.

Leander, now turned and serviced, was waiting in the bay, giving plenty of opportunity for unobstructed photos and, about 15mins before departure, shunted back onto the train ready to head back to Taunton.

Thankfully the passengers who’d risked the trip to Looe made it back in time (apparently they managed a couple of hours there) and as soon as we set off, our stewards started the dinner service.
We’d pre-ordered a bottle of wine before disembarking, and that arrived promptly along with our starters, a very tasty pâté!
Other passengers had ordered the soup starter, and I’m always impressed with how the talented stewards are able to safely serve soup on a train that is rocking and rolling from side-to-side!

The main course was a mouth-watering steak along with veg and cheesy potatoes.
It was nice to see that, with the easing of restrictions, silver-service has returned rather than pre-plated dishes.
Dessert was apple pie and custard, with the final course being a selection of cheeses and crackers, all accompanied by the roar of Leander just 2 coaches away!

The sun was beginning to set as we sped along the sea wall, no doubt creating an atmospheric sight for the photographers, and we arrived at Taunton just after dark. 47245 was ready and waiting to whisk us back to Reading.
As we bid goodbye to Leander, another bottle of wine was ordered, and we sped off into the night.

Yet again, we couldn’t reach Newbury without incident; the signaller had attempted to route us through a through road rather than one of the platforms (apparently the fifth time this has happened), and we finally rolled into Reading about 10 mins behind schedule.

All in all, a great day out. Excellent food, attentive staff, great company and a top quality performance by Leander.
While it was disappointing that we couldn’t make it into Cornwall, it’s one of those things that can’t be helped when dealing with old machinery, and full credit to the staff on the day for working out a Plan B.
We’ll just have to come back to the South West again soon for another attempt!

After a flurry of main line steam, we’ve now got a bit of a break… a whole three weeks until our next planned trip!

A day before we set out for Reading, yet another large package arrived from Widnes, with the contents of our Hattons trunk, a fairly eclectic mix.

The main items for me were a couple of DMUs. One of the new Bachmann Class 150s in ‘Provincial’ blue & white to join my selection of early-90s DMUs, and a pre-owned Bachmann Class 168 ‘Clubman’ DMU in Chiltern Railways livery.
The latter has been out of production for a while, but I’d been after one as they’re a regular staple of my travels from Banbury. It’ll got nicely with my Dapol Class 68… just need those Mk3 coaches now!

Alongside that were some scenic items for the 009 line before too long, and a Swedish coach to add to the collection.
With a number of pre-ordered items due in the next month, we suspect that the postman is going to be kept busy, we’ll report on them as they arrive.